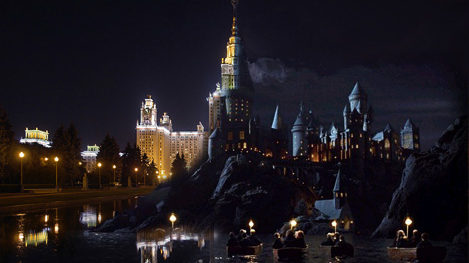 Moscow State University named after M. V. Lomonosov is a dream for millions of Russian students from all the regions of the country. Whatever their background, wherever they come from, everybody knows that all the talented girls and boys become a part of MSU story.

Many people believe that the first Russian university to a large extent reflects the identity of a man, after whom it was named. Mikhailo Lomonosov, Russian “homo universalis”. He was a scientist, who greatly contributed to such spheres as physics, chemistry, navigation, astronomy, geography, geology, literature, philology, arts, history, education, economics and others. Probably, that is why Alexander Pushkin said about Lomonosov that “he himself was our first University”.

During the Stalin`s epoch, Lomonosov MSU were given its main building with 31 stages and several blocks inside. Since then, the view of MSU inspires artists and amazes tourists.

Not surprisingly, Russian citizens compare MSU to the Hogwarts.

And Botanical Garden, where students can have a rest after classes

All these creates a unique atmosphere of magic here.

But what is more important, just like Hogwarts, MSU is a place for those, who thinks different. No matter, where you come from, just as Hogwarts, MSU knows that its students will find their way home.