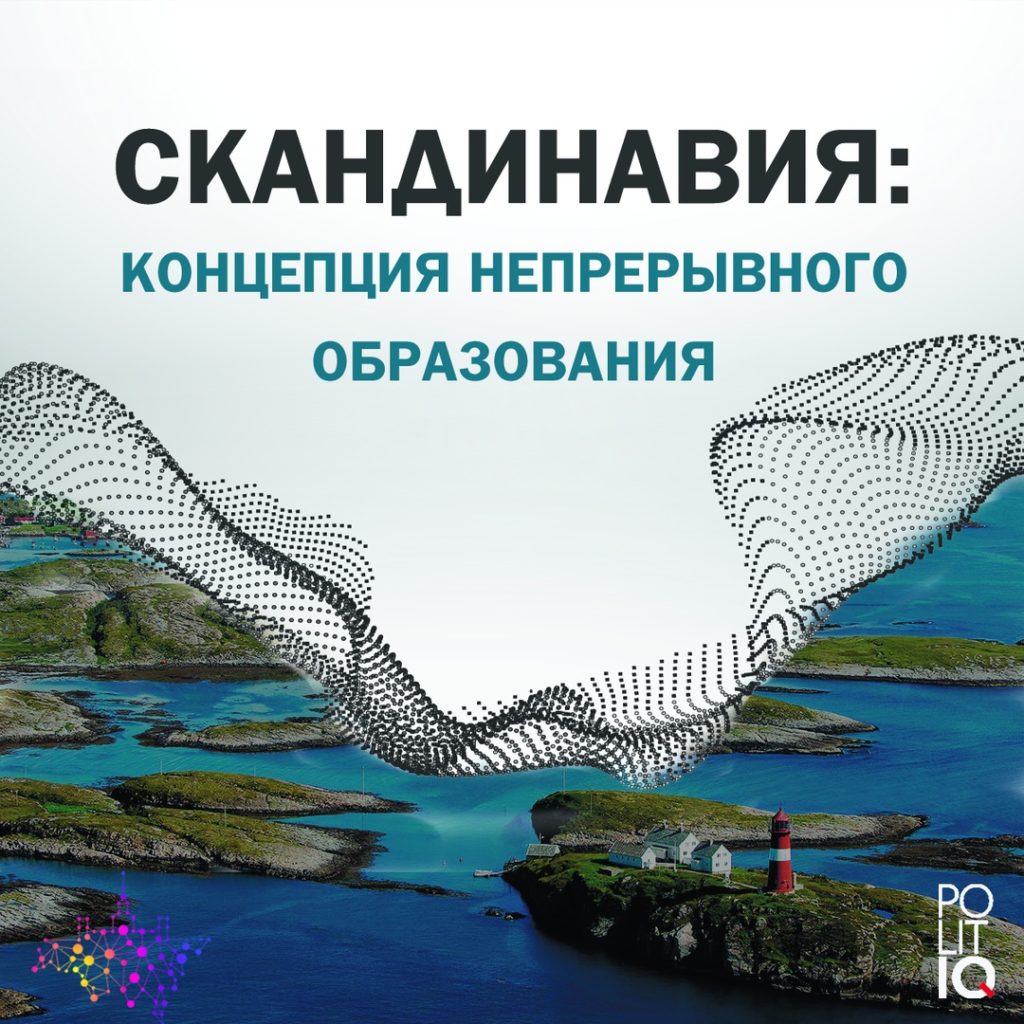 The uniqueness of the Master’s program in political science PolitIQ lies in the fact that Russian professors and experts from the Moscow State University and MGIMO specialising in the history and problems of the post-Soviet space will work side by side with our foreign partners from the USA, Canada, Norway, Switzerland and China. Already in the new school year 2018/19 we expect foreign students from both the CIS countries (the Commonwealth of Independent States), and from the US, Europe and Asia. Thus, you can get acquainted with students from all over the world, consider aspects of public policy from different perspectives, share experiences with your future colleagues, and perhaps even new friends.

Since the program is international and is taught in English with the participation of invited specialists from abroad, we decided to address such an important topic of our time as the need to increase the level of education. Indeed, at the end of the bachelor’s program some students ask themselves: what to do next? They have a choice: to go to work or to continue the education at the higher level. It can be difficult to make a choice, so we decided to analyse the experience of the most developed countries, namely Scandinavian ones. Largely due to the concept of continuing education, these countries have become rich and successful.

How do people in the North think? 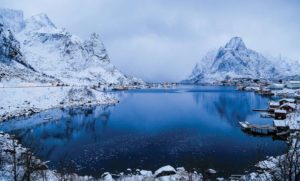 Acquired for the duration of studying at school and university professional skills require further development, as the world is rapidly changing. This is due to technological progress, vulnerable political and economic situation and globalisation. What you’ve studied at the university quite recently, today can become obsolete and insufficient for the successful promotion of the career ladder.

In other words, it is always necessary to update your knowledge. The need to acquire new skills and competencies arises everywhere, especially in the field of new technologies, scientific research, as well as major humanitarian disciplines such as economics, jurisprudence and political science. For example, an architect who graduated in 1980 will not be able to carry out modern projects unless he regularly attends the latest training courses. A future diplomat or employee of state structures should be well versed in the historical and political context, regularly expanding their knowledge on various topics, especially regarding those countries where there is an unstable political and economic situation. For example, in post-Soviet countries.

At the Sixth World Conference on Adult Education – Confintea VI (Belem, Brazil, 2009), UNESCO introduced the term “training and adult education”, meaning both professional and general education, for example, literacy and the development of others basic skills, the acquisition of new knowledge and attitudes. Adult education reflects a specific philosophy about learning, based on the assumption that adults can and want to learn as well as to take responsibility for their own learning. And the educational process should meet their demands. 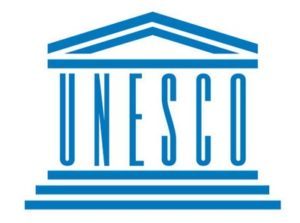 The main goal of adult education in Norway is to give everyone the opportunity to expand their competencies and develop skills throughout their lives. In Norway, education is believed to help people improve their quality of life, create values and increase flexibility in their work. Competence and skills of the population are the main factors for ensuring economic growth, employment opportunities, competitiveness and cooperation.

Free education for adults is a fundamental right guaranteed by law. The Norwegian Agency for Lifelong Learning (Vox) has developed programs and offered funding for projects in which companies and stakeholders work together. The aim of the programs is basic education of adults on-the-job.

The following statistics show that half of the employed population of Norway between the ages of 22 and 66 increases the level of their education in various courses and trainings. 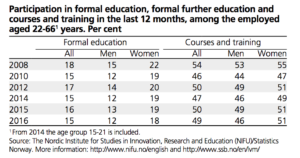 Source: The Nordic Institute for Studies in Innovation, Research and Education (NIFU)/Statistics Norway

The concept of lifelong learning

If in the 1970s people worked to live, today more and more people live to work. They occupy highly skilled jobs that require the continuous development of their human capital – both in person and in the professional – throughout their lives.

There seems to be a link between the economic and social well-being of Scandinavians and education policy. In the Scandinavian countries, the egalitarian school system, which is aimed at the equal distribution of benefits among students, regardless of their social background, which directly contributes to equality of income and cohesion in society. And further adult education contributes to higher employment, social security and economic prosperity.

Sweden as an example

As in other Scandinavian countries, lifelong learning is very well developed in Sweden. The level of participation of the population in formal and non-formal education – the latter refers to open or distance learning, private studies, seminars and other methods of training – at the age of 25 to 64 years is 66%. This is the highest among the OECD countries (Organisation for Economic Cooperation and Development), along with Denmark and Finland. As a rule, most people engaged in lifelong learning work: 71% of the employed population participates in formal and / or informal education. At the same time, the level of participation of inactive people, that is, people who are not looking for work, is 36% – the highest among all OECD countries. In this sense, lifelong learning can be an effective way of rehabilitating the labor market.

It is interesting to note that the desire for education is observed among the adult population of Sweden. Every third person between the ages of 25 and 64 would like to study. Many people study because they want to develop in their profession, change careers or because they are interested in learning new things. Studying all your life or life-long learning is seen in the countries of Scandinavia, and in Sweden in particular, as something positive.

The employment rate at all levels of education in Sweden is 82%. For people with higher education, it reaches 90%. This is the third largest indicator among the OECD countries after Iceland and Switzerland.

The labor market in Sweden is fairly homogeneous: the difference in income between employees with higher education and with a higher secondary or post-secondary non-tertiary education is quite low compared to other OECD countries and partner countries.

Gender equality is another hallmark of the Swedish system. The difference in employment between men and women is less than 3%, which places Sweden on a par with Iceland, Norway and Portugal.

In the diagram below, you can observe the following: about 80% of the adult population aged 25-64 years continues their self-education in addition to the already received formal (university) and informal (courses, trainings, advanced training). As the main means, Swedes use a computer, a tablet and a smartphone. 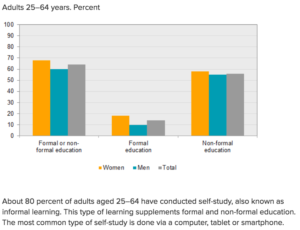 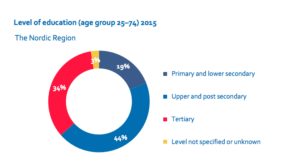 The first major change is the transition from labor market policy to employment policy. Flexible conditions are created for different types of employment through education and training. The second, which is crucial for the mobility policy, is the well-developed coordination between employment policy and educational policy, as this increases the competitiveness of the business. If a person works or prepares for employment, he should pay special attention to education and training. Thus, it maintains the ability to adapt to a dynamic labor market.

At the moment, labor markets in Scandinavian countries are experiencing a shift towards knowledge-intensive production, while many traditional industries are disappearing. If this change is not accompanied by intensive education and training, the northern countries will survive the situation of a shortage of skilled labor and the formation of a large number of vacant jobs. So today education is a priority for the Scandinavian countries.

As we found out, the success of Scandinavian countries is largely based on those social and economic principles that the authorities adhere to. This also applies to educational policy. Scandinavians not only do not strive to finish their studies quickly, but, on the contrary, extend it for life. They understand that progress does not stand still and regular updating of knowledge is the main condition for success.

Education at a Glance, Centre for Educational Research and Innovation, 2014